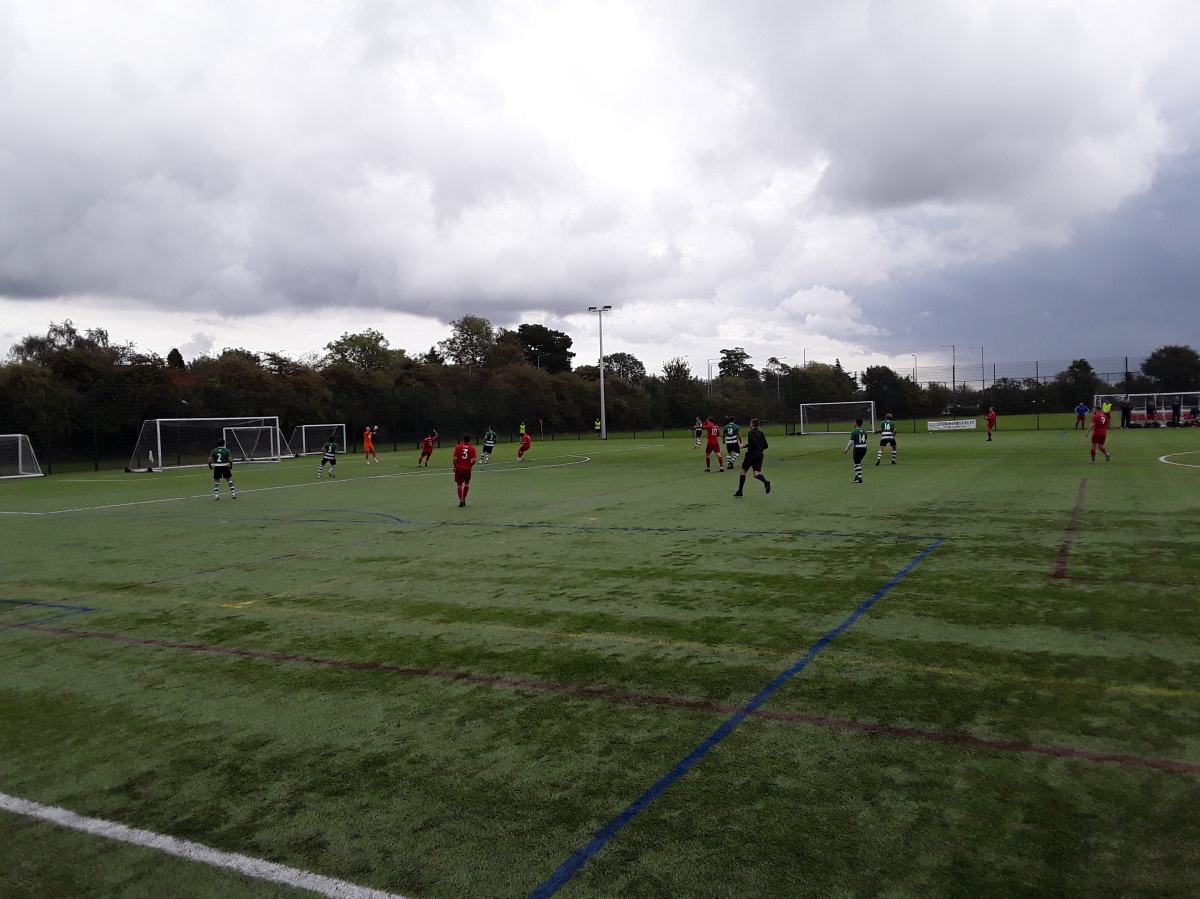 On an afternoon where a number of games were scrubbed because of the incessant rain this week, I decided to head to the Len Forge Centre to see Catholic Utd’s local derby with Leigh Ramblers, in an Essex Olympian League Premier Division encounter. Conditions were tricky from the outset after the recent downpours but recently-appointed boss Stuart Marshall named stalwart & skipper Louis Godwin-Green in goal, with Louis Robinson and Ellis Sands as centre-backs and a front three of Alfie Lindfield, player-coach Simon Thomas and regular goal-getter Aaron Baldwin. Among the options on their bench were midfielders Tom Kearney, Brad Rowland and forwards Rhys Fatt and Luke Trice.

Ramblers are in a similar transition under new boss Colin Wall and named a back four of Billy Carterand Joe Hunter at full-backs, with Harry Haysom and Ryan Lowe at centre-back with Lowe also skippering the side. Justin Hazell and Dan Williams led their attack, with George Moxon and Matt Allum among their options from the substitutes’ bench.

Onto the match itself, and Catholic started the match in a promising fashion, pinging a few well-directed crosses into the visitors’ 18-yard box, with a neat move involving forward pair Aaron Baldwin and Alfie LIndfield unfortunately not quite having the desired end product for the home side. Leigh had a sighter of goal on eleven minutes as forward Dan Williams’ strike from a corner was cleared with inches to spare by the Utd defenders. Stuart Marshall’s side soon pushed forward and after being well-spotted by Lindfield’s through ball, Baldwin could only slot just wide of visiting stopper Andrew Webster. The deadlock was broken on nineteen minutes as an accurate threaded ball by midfielder Max Kent found the path of Baldwin, who did well to shrug off and pressure his marker, before being felled in the penalty area. Spot-kick. Harley Kee stood up to take it and coolly struck home, sending Webster the wrong way.

So, the ‘Super Hoops’ had the lead but it was a slim one. Ramblers responded almost immediately as they went on the attack, with right-back Billy Carter’s good centre being cleared by the home defence. In fairness, the hosts were unlucky to not go further ahead on 24 minutes as another good ball in found centre forward Simon Thomas, who lobbed Webster well but didn’t have the same fortune with the woodwork, as the ball cannoned back off the underside of the crossbar and was able to be cleared. That being said, Ramblers were still more than useful on the counter-attack, with winger Scott Rankin fizzing in another good centre from the channels, though that crucial last touch was wanting, much to the relief of Utd custodian Louis Godwin-Green. Even so, Colin Wall’s side built the pressure as the next few minutes went on, as Rankin sent a looping header in on goal but Godwin-Green was happy to gather.

Ramblers then forced a few set-pieces as their momentum continued, from one of those corners, winger Patrick Cannon delivered and sleepy defending by Catholic allowed Ramblers skipper Ryan Lowe to ghost in unmarked and powerfully head home to level the match on 34 minutes. This time it was the hosts on the proverbial back foot, as minutes later, Cannon stuck a fine effort which skimmed off the top of the goal frame. The visitors kept up their pressure a minute before the break as after a Sam Mountstpehens free-kick had been deflected wide for a corner, from that set-piece, centre-back Harry Haysom wriggled some space and headed home right into the left corner, much to the delight of the travelling contingent.

The visitors had the lead at the break and in some ways they had earned it for keeping a determined attitude to their defending and making the most of their chances. In the first part of the second half, both sides looked to take the initiative, with Thomas narrowly heading over from a free-kick for the hosts and Carter firing off-target for Ramblers. It was nearly a milestone moment midway through the second-half for Ramblers centre-back Haysom as his clever turn led to a fierce drive from 25 yards which home ‘keeper Godwin-Green did well to get down to and parry wide.  At the other end, Kent continued to fizz in some angled through balls to the forwards and centre-half Louis Robinson’s header was gathered by Webster before substitute Luke Trice also fired off-target.

Ramblers were showing a strong work rate and energy to repel the Utd forward line and yet, you felt that another goal was necessary to seal the match. Fortunately for them, it came in the closing minutes. A clever passing move by the visitors ended with replacement George Moxon in on goal with only Godwin-Green to beat and Moxon made no error, calmly lifting the ball over the goalkeeper to finally put the result beyond doubt.

After five minutes of added time, the final whistle blew and the visitors prevailed and in the end, they deserved to do so. After a long post-match discussion with his players, Catholic Utd boss Marshall felt his side was ‘second-best’ for large parts of the match.

This was in summary, a really good battle between two good sides and also a good ‘advert’ for the division, which is still arguably ‘under-rated’ by some in the Non-League scene. Ramblers put in an absolutely stellar shift, full of fire, energy and work rate to take a well-earned three points. In terms of the players that stood-out for me today, firstly for the home side, forwards Aaron Baldwin and Simon Thomas gave their side running and a physical threat as well, particularly in the first half. Max Kent also put in some telling long passes & through balls and deserves a mention, while Michael Sammut also stuck to his task well assisting his defence.

For Leigh Ramblers, the whole team was fired up for this local derby but in particular, skipper Ryan Lowe led his defence superbly and noticeably lessened the aerial threat with committed defending, backed up well by central defensive partner Harry Haysom, who also gave little chance to the opposition at times. Both of them took their goals well also. Winger Patrick Cannon was also a good outlet going forward, as was forward Dan Williams who was a good focal point in attack. Last but not least, full-back Billy Carter also put in a good performance with an energetic display with good tackling and crossing in the final third.