With this week’s near-endless rain heavily affecting this weekend’s action in Steps 4, 5 & 6, the featured match was from the Essex Olympian League Premier Division (Step 7) which saw Old Southendian welcome Kelvedon Hatch. This was the first match staged at the new Garon Park 3G pitch, after a three-month renovation of the old grass area was completed earlier this month. It wasn’t plain-sailing though for the hosts, who had to start with manager Connor Lane in goal, with a defence of Charlie Kernott, Steven Sharpe, Matt Wilson and Connor Burrows. Burrows has made eight appearances for Essex Senior side Southend Manor earlier this season. Craig Paton, Nick Henesy and Ed Gould made up the forward line with Elliot Hemmings, Nico Dubouchet and Harry DaCosta were among the substitutes, as was the unfortunate goalkeeper Ryan Smith.  Kelvedon fielded Rob Hatton between the posts, with Dan Johnson skippering the side and ex-Barking forward Ashley Wackers leading the line, supported by Ade Cole and Dan Hawkes. Glen Golby was among their substitutes.

As we entered the initial phases of the match, it was the home side that the better of the early opportunities though forward Nick Henesy was unable to create the power behind his goal-bound effort from close range as Hatch goalkeeper Rob Hatton did well to deny him low down, closing the angle. On nine minutes, Stuart Paton sent in a good ball from the right which found Craig Paton though he could only loft his shot over the top corner. Connor Lane’s side did break the stalemate with eighteen minutes on the watch as Stuart Paton struck home from close range past Hatton.

As we moved into the midway point of the half, Kelvedon midfielder Richard Kadima had a effort which fizzed over the woodwork before the same player made buccaneering 40-yard run through the middle before being brought down. The chilly air was drawing in by this point as was the intermittent rain which glistened off of the damp surface. OS had a few more half-chances though Hatton was not unduly troubled really. Just past the half-hour, the visitors responded and found their rhythm though forwards Ashley Wackers and Dan Hawkes were both comfortably denied by stand-in ‘keeper Connor Lane. Energetic midfielder Ade Cole also had a sighter at goal though blazed wide from a decent position, 20 yards out. 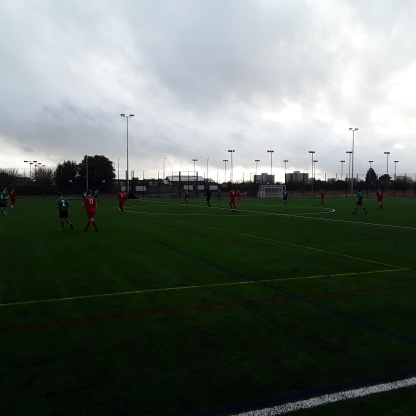 The last major chance of the half saw forward Craig Paton do well to elude his marker and his strike was well-saved by Hatton, who got down smartly to parry it away strongly.

Early in the second half, following a decent run by Hawkes, Hatch midfielder Oliver Slater also struck off-target and the half-chances that were not snapped up by the Brentwood-based side came at a cost. The Greens extended their lead five minutes after the interval as after good work by full-back Steven Sharpe down the left flank, he passed to forward Ed Gould who looped in a powerful drive which sailed over Hatton and into the far corner. The visitors may have felt it was a fortunate sucker-punch but it was still some goal to see. The next passage of play was a little scrappy though the latter stages rovided some notable moments. With seventeen minutes remaining, OS substitute Nico Dubouchet picked the pocket of Hatch custodian Hatton though unfortunately dragged his effort over the bar with only Hatton to defeat. Fellow home replacement Elliot Hemmings showed plenty of purpose after coming on, and he showed good skill on-the-ball before feeding Henesy though his strike was skewed wide. To be fair to the visitors though, they finished the match quite strongly with a tactical switch saw Wackers revert to centre-back and veteran Glen Golby entering the fray in attack. Eleven minutes from time, Hatch’s Josh Smith found his way in on goal though when one-on-one with replacement goalkeeper Ryan Smith though the ‘keeper did well to deny a good strike by Josh Smith. Kelvedon did deservedly get on the score-sheet with seven minutes remaining as after some ‘ping-pong’ in a congested penalty area, Kadima did well to show awareness and lobbed in from close range.

The hosts rode out some late pressure to claim the points here and it is a vital win which takes OS into 10th place. Nick Henesy and Ed Gould stood out for OS today, as did substitute Elliot Hemmings with an energetic display. For Hatch, midfielder Richard Kadima had a really good game and capped it with his late goal. Ashley Wackers and Ade Cole also enjoyed good games today.

Finally, my thanks to the OS manager Connor Lane, my Non-League colleague Pete Dudley for the additional photos which have been credited, and I wish both clubs well for the remainder of the Premier Division campaign. I would also like to wish all my readers of this blog a very Merry Christmas & very happy & peaceful new year in 2020.
Teams