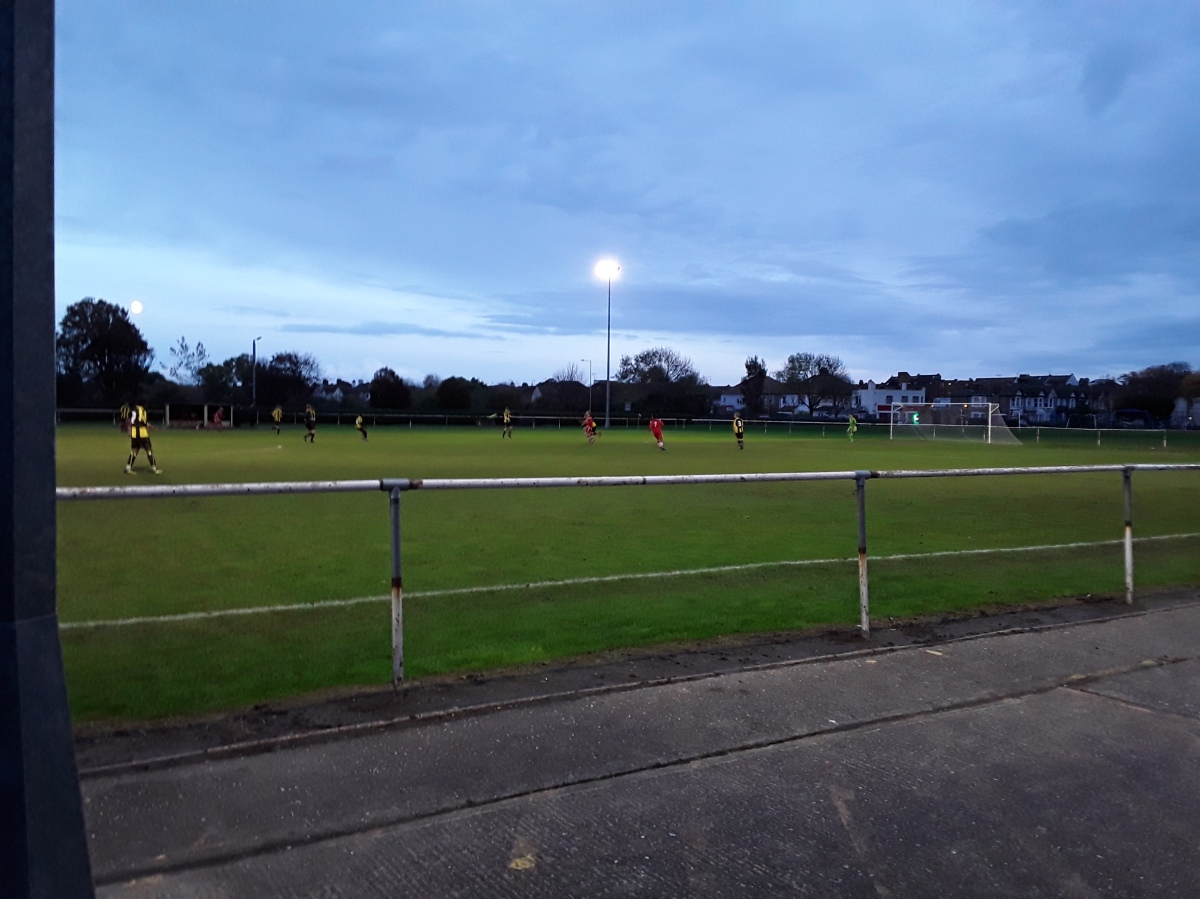 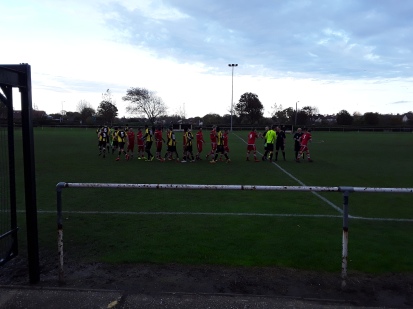 The Essex Senior weekend continued on Saturday as I returned to Southchurch Park as Southend Manor took on in-form Cockfosters. Manor named a back four of Derek O’Halem and Kiah Froud as full-backs with ex-Redbridge player Reece Latimer alongside Cameron Harris at centre-back. Right winger Jordan Chambers skippered the side, with a front two of Larry Akanbi and Michael Ogboin. On the bench were the likes of Max Makaka and Oussama Khayar. Cockfosters were unbeaten in their last three matches heading into this one and retained Brad Robinson between the sticks, with Dan Odamo partnering skipper Danny Haigh at centre-back with Reece Monsanya reverting to left wing-back. Billy Healey and Ned Clarke resumed their forward partnership here while George Beattie and Ceykan Karagozlu were among the substitutes.

Manor side remembers the fallen before KO (Image: Andy W) 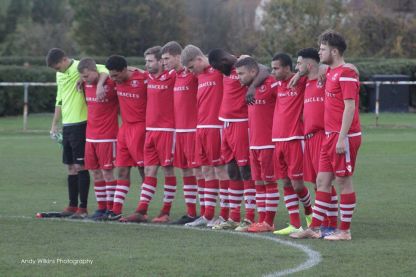 Before the match, we had the customary minute’s silence to mark this Remembrance weekend and it was observed impeccably. This match didn’t take long to fire up once it started with ‘Fosters player-boss Ryan Wade whizzing a free-kick just wide of the left-side post only two minutes in. A ‘blink of an eye’ later, the net bulged as neat play from Ned Clarke saw him tee up strike partner Billy Healey who made no mistake in firing low past home ‘keepr Josh Blackburn. Moments later, the dozy start by the hosts was compounded as Clarke headed in for the visitors’ second only three minutes afterwards.

‘Danger signs’ continued to sound for the home defence as on nine minutes, a fine cross from the left by winger Alex Michaelides only just eluded opposite winger Rueben Campbell’s head at the back stick. Five minutes later though, the visitors would have a third goal as a peach of a cross by Clarke found Healey’s head and his looping header evaded Blackburn and into the net. It was some start for Cockfosters and not being unkind, though Manor looked a bit stunned by it. Try as they might, they could not really get their passing game going as errant passes went astray, much to the home side’s frustration.

That being said, central midfielder Ruben Kennedy did to an extent get his team going with some astute passes and with twenty minutes gone, he played in support forward Grant Frances though visiting custodian Brad Robinson gathered well at his feet. Manor were creating half-chances but their shots on goal lacked the power to beat Robinson, with forwards Michael Ogboin and Larry Akanbi being denied comfortably before another strike by Ogboin sailed into the side-netting.

Either side of the interval, Manor continued to gradually build their platform of passes, requiring Cockfosters skipper Danny Haigh to make two crucial interceptions to temper the opposition attacks. As we approached the hour mark, more neat work by Clarke ended with another good Michaelides cross from the left which again just couldn’t find the arriving Campbell at the back post. Robinson was called into action again soon after, first denying a Frances strike before the same player angled in a free-kick from 20-plus yards out, which the visiting ‘keeper clawed away.

Cockfosters once again built up their forward play as we entered the last twenty minutes as from a nice back header by Healey, Clarke struck wide. Substitute George Beattie also drew a decent save out of Blackburn , moments after entering the scene. To their credit, Manor were determined to get something out of this match, shown in spades by energetic winger Oussama Khayar, who made several rapid runs down the channel to spur his side on. With 12 minutes remaining, Khayar’s good ended with a shot that went just wide. Soon after that, a good cross-field ball by Khayar found full-back Derek O’Halem who in turn found substitute Max Makaka though his strike just outside the box lacked the venom to bypass Robinson.

Cockfosters rounded off a fine afternoon with five minutes left as after a fine run by replacement Ceykan Karagozlu, his thoughtful pass found Beattie who couldn’t miss from close range. Despite Akanbi having two half-chances late on, Manor were well beaten here after their poor start had effectively cost them the match.

In summary, it was the right result despite Manor showing more willingness to get forward and more energy in the second half. Quite a few players stood out for me today – for the victors it was hard to ignore the front two of Billy Healey and Ned Clarke, with their understanding growing and three goals between is some return today. Also, right winger Rueben Campbell had a good game as did Alex Michaelides on the opposite flank and powerful centre-back Dan Odamo who typically was no-nonsense in his clearances. For Manor, right-back Derek O’Halem did well with a disciplined and energetic performance, with Michael Ogboin and midfielder Ruben Kennedy also working hard to get their side going. Also a mention goes to substitute Oussama Khayar who expended a lot of energy with driving runs down the channels to try to get his team going, but to little avail.

Finally, I’d like to thank Southend Manor for their hospitality and wish them and Cockfosters well for the remainder of this campaign.

Booked: None | Sub Not Used: Crockett