The FA Vase – Second Round Proper 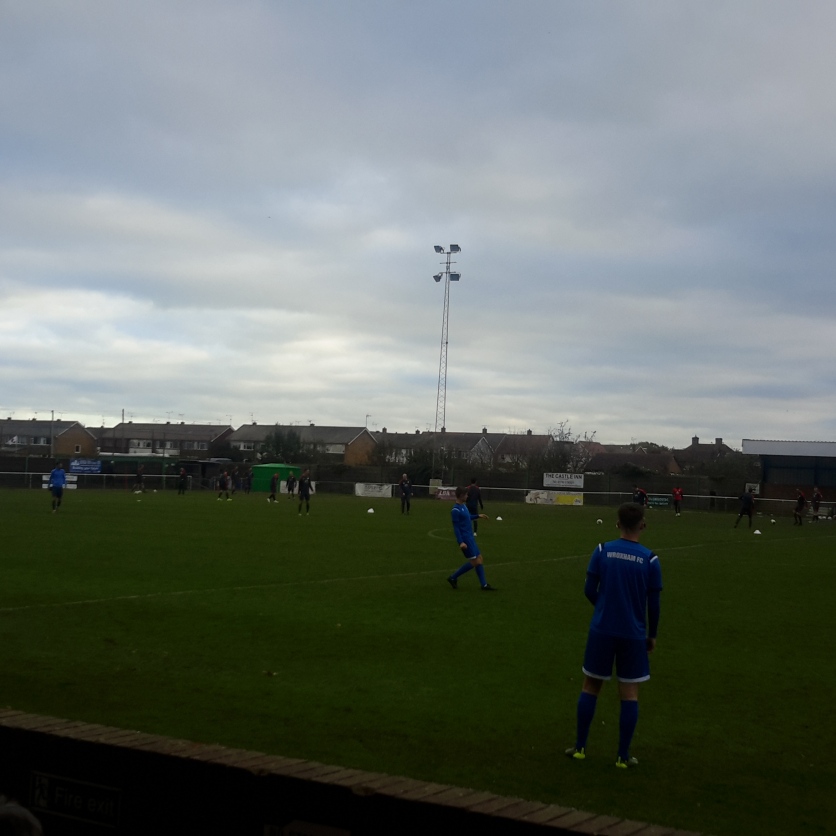 The final match of a hectic weekend saw a return to Burroughs Park for the latest match of White Ensign’s record-breaking FA Vase run, at home to Thurlow Nunn Premier (Step 5) high-flyers Wroxham. Enisgn have already won at home to Cornard Utd and Buckingham Athletic in the Vase this term, though this would be an altogether tougher assignment. Ensign fielded goalkeeper James Parkins between the posts, a defence of Charlie Buffin, Thando Moyo and centre-backs Elliot Vile and Andy George with a front three of Dominic Locke, Connor Barnby and player-boss Brett Munyard, who had recovered from illness. Ben Austin and John Hillard were among a four-man substitute’s bench. Wroxham named captain Ollie Sutton in goal, with a midfield of sitting midfielder Jordan King, Harvey Black plus wingers Simon Lappin and Charlie Clarke supporting forwards Shaun Taylor and ex-Norwich City veteran Grant Holt, still going at the age of 38, which commands respect you have to add. The Yachtsmen could afford to name six substitutes with Tim Henery, Ryan Oakley and Tom Huckerby among them.

White Ensign looked to start the contest strongly with neat attacking play as in the opening minute support forward Connor Barnby struck an effort straight at opposition stopper Ollie Sutton from 20 yards out. Wroxham predictably responded soon afterwards, as midfielder Harvey Black struck narrowly wide of the right-side post on the quarter-hour. Black then had another opening soon after from a corner though he was unable to divert the ball past home custodian James Parkins. As we entered the midway point of the half, Brett Munyard’s sweet free-kick found centre-back Elliot Vile’s head though Sutton flew in the air rapidly to make a fine one-handed save to deny him.

That chance would hurt the hosts as only a minute later, a good ball in to the back-post by the visitors found wily striker Grant Holt, who headed back across goal and strike partner Shaun Taylor evaded his defender and bicycle-kicked home from about six yards past Parkins. Ensign could have levelled on 26 minutes as another fine free-kick from Munyard was foiled by Sutton who kept his focus and his bearings to tip it over. Wroxham were starting to unsettle the flowing passing game of the hosts, though not before on the half-hour a good ball in by energetic full-back Charlie Buffin found rapid winger Dominic Locke whose cross from the by-line found forward Luke Skinner though his header lacked direction as it flew wide.

The Yachtsmen were always a threat at the other end of the pitch, with Holt being well denied by a great tackle by centre-back Andy George, denying him a sniff of goal. Moments later, Barnby did well to play in Munyard though he couldn’t bypass Sutton and the glaring chance only increased when the rebound found Luke Skinner, only for the latter to skew his effot wide, after more good work by Locke down the right. Sutton got a bit of luck just before the interval as he rushed out of his goal too quickly though Munyard could only head wide with the goal gaping. 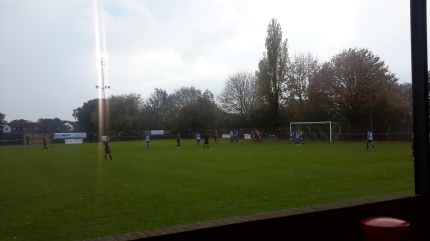 After the interval, all the good chances Ensign had came back to bite them somewhat as four minutes into the half, desite loud cries of off-side by the home supporters, winger Charlie Clarke nipped in to beat Parkins one-on-one to give Jordan Southgate’s side that crucial second goal. Unsurprisingly, the visitors grew in confidence after that and could have been further in front if Holt hadn’t blazed wide when one-on-one with Parkins on 53 minutes. They didn’t have to wait long for the third though as five minutes later, a superb cross in from the left had enough height to evade centre-back Elliot Vile and fell right on Clarke’s head who powered home well to really add ‘insult to injury’.

With 21 minutes remaining, Locke was denied by combination of defender and Sutton though the big story was just about to hit us. With around fifteen minutes yet to play, quite suddenly the floodlights went out around the around all at once and despite pleas from the visitors to see the game out, referee Stephen Matthews halted proceedings. Despite efforts to restore the stricken generator station, the referee soon after had no option but to abandon the match.

All in all, this was a closer match than the scoreline may seem, though equally Ensign were unusually not clinical with their chances and were found a little wanting in their passing to the forward line. Wroxham took their chances well and showed good levels of craft as well as energy and skill.

Finally, with regards to stand-out performances here, Dominic Locke once again shone for Ensign with pace and power as well as decent passing ability to go with it. Connor Barnby also supplemented the forward line well with movement and pace, while full-back Thando Moyo made several important interceptions to stifle the impressive visitors, and the other full-back Charlie Buffin put in a typically dynamic, energetic display with good defensive nouse as well good energy. For the Yachtsmen, ex-Scottish International Simon Lappin showed enough skill and creativity to really get his side ticking, while Shaun Taylor and Charlie Clarke were constant threats to the over-run home defence at times. Anchor midfielder Jordan King also deserves a mention for breaking up opposition attacks well at times. Finally, goalkeeper Ollie Sutton made two superb saves to keep his side well in the contest before they were in the ascendancy.

Thanks also to Ensign for their hospitality today, it was also great to see former Premier League players Grant Holt and Simon Lappin in action as well. It doesn’t come around every day. It would appear the situation is that the FA have decided that the replayed match will take place at Wroxham’s Trafford Park on Wednesday night. I can only add that you can never second-guess what the FA decide.