The FA Vase – First Round Qualifying

Another frenetic weekend on Non-League action ended with this FA Vase First Round Qualifying tie between Eastern Senior League South side White Ensign and Thurlow Nunn Division One North side Cornard United at Burroughs Park. Ensign have had a spirited start to the campaign with a win in the FA Cup recently over Woodford Town and named a strong line-up here with James Parkins retained in goal, Harry Skinner, skipper Jake McWee and Harry Skinner in midfield with a front three of Connor Barnby, Dominic Locke and player-manager Brett Munyard. Ben Austin, Luke Skinner and Reserves graduate Zach Somerset-Butler were all options on the bench.  Cornard are winless in their division thus far this term though you always have to wary of changing fortunes in Cup competitions. They fielded Harry Allen between the sticks, a front two of Chris Morgan and Ezra Drann with new signing George Vallentyne, once of Hashtag Utd, skippering the team today. Matthew Geen, Oliver Judge and Daniel Sakal were all options from the substitutes’ bench.

The home side certainly started proceedings well with rapid winger Dominic Locke making a series of darting runs down the right flank. The first of those runs ended up needing the intervention of Ards full-back David Dowding to clear. Ensign player-boss Brett Munyard found some space though five minutes in between the visiting midfield and defence to unleash a 25-yard thunderbolt which Cornard ‘keeper Harry Allan did well to get fingertips on though the ball still flew into the net to give the hosts the lead.

Ensign had more promising situations from midfielder John Hilliard’s free-kicks during the half though on 26 minutes, another powerful run from Locke down the right channel ended with his delivery well-headed away by visiting centre-back Neil Goldsworthy. Ensign nearly doubled their advantage just shy of the half-hour as a stinging set-piece by Hilliard was heading right for the corner, but for the intervention of a really good save by Allan. Cornard couldn’t create too much at this point though forward Chris Morgan was keeping the home defence alert with a series of intelligent runs; backed up by the wing play of George Vallentyne. With minutes to go before the break, Morgan had a half-chance on goal though his 20-yarder lacked the sting to beat White Ensign goalkeeper James Parkins.

Three minutes after the interval, Cornard had a firm opening to remove the deficit they had, with winger Vallentyne’s powerful drive from about thirty yards needing Parkins to beat it away with a strong hand. As it happened, The hosts did extend their lead on 58 minutes with Munyard being played in well by Hilliard and slotted home low past Allan.

Cornard were still posing the odd threat on the counter-attack with Morgan and Vallentyne posing the biggest dangers for the home backline, though Elliot Vile and Andy George had another decent display at the back. Ensign pretty much made the game safe with arguably the best move of the match with another strong run by Locke feeding Hilliard who in turn found skipper Jake McWee who lashed home from a narrow angle with eighteen minutes remaining. That said, Utd really gave it a go in the last fifteen minutes, much to their credit.

Ensign custodian James Parkins certainly earned his kudos today, first denying substitute Matthew Geen twice before getting across well to deny another rasping effort by Vallentyne. Right on the ninety minutes, Parkins rushed out of his goal to assist his defence, though Geen couldn’t bypass the firm back four and find the target. The only dampener on the last sixth of the match really for Dave Childs’ team was the dismissal of left-back David Dowding for two bookings in the space of four minutes late on. 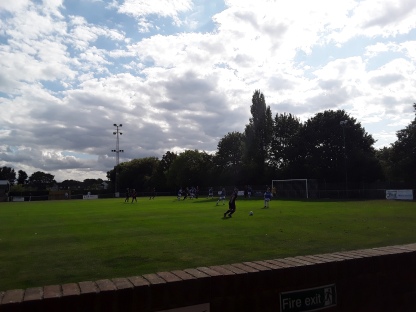 All in all, this was a very good performance by Ensign who were clinical in their finishing whereas the Ards will rue the fact they created several opportunities in this match though they also found Ensign goalkeeper James Parkins in very good form. Even so, they did deserve a goal for their second-half efforts in particular.

Finally, with regards to stand-out performances here, Ensign’s penetrating attacking play was at times led by the good darting runs of right-sided forward Locke, with creative midfielder Hilliard also making his mark. Add to that the finishing of forward Munyard and the acrobatics of ‘keeper Parkins and that is that. For Cornard, new signing George Vallentyne certainly made things happen, as did centre forward Chris Morgan while centre-back Neil Goldsworthy also deserves a mention for being sturdy in defence.