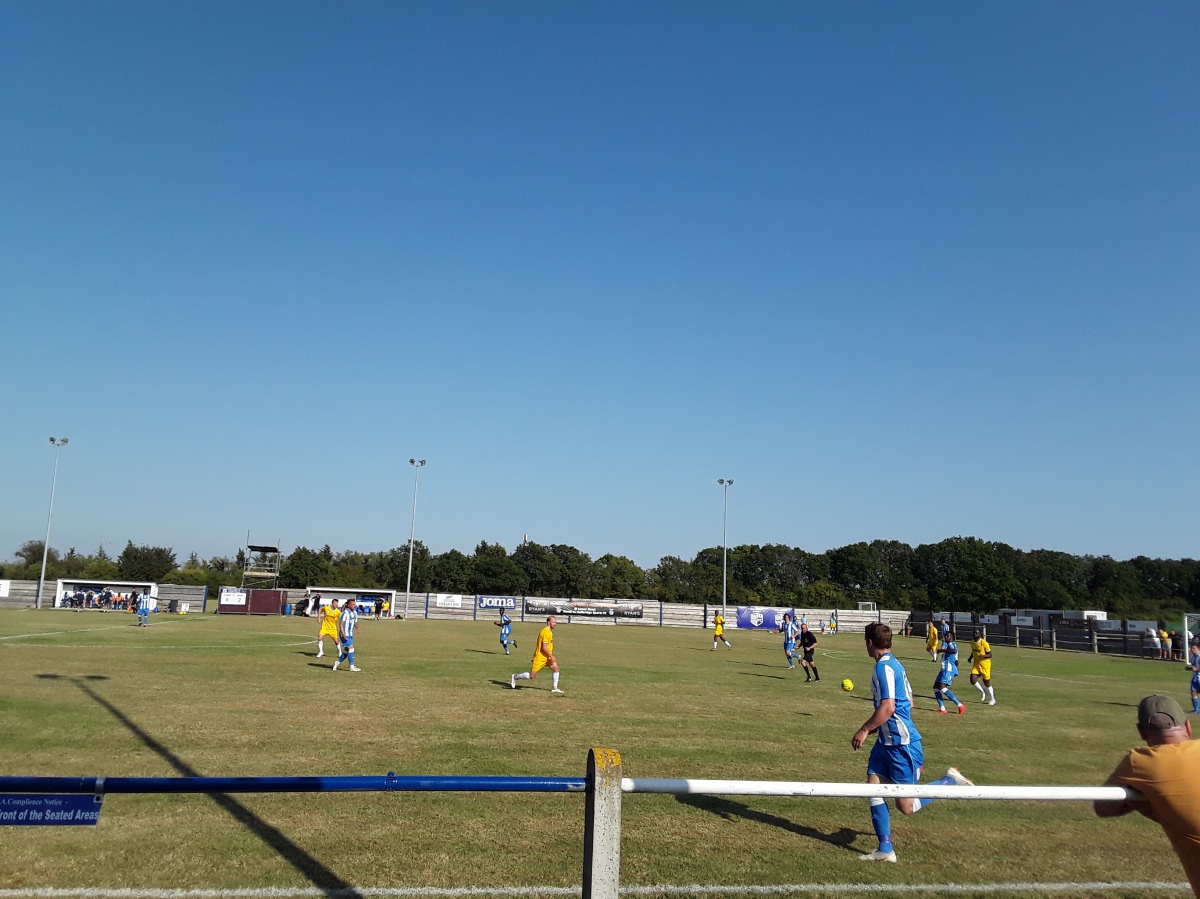 The August Holiday weekend action was rounded off with a nice visit to Lower Road to see last season’s Essex Senior League champions Hullbridge Sports take on local rivals Canvey Island, an established Isthmian League North side. Darren Manning’s side were looking for their first win at Step 4 while Canvey had won both of their previous league games but had been in action on Saturday with a win at Step 6 Stotfold in the FA Cup. Hullbridge named a core of players that won that ESL title last term. Recent signing Rob Budd continued in goal, with a back four of full-backs Courtney Homans and Matt Rose plus centre-backs Jamal Allen and skipper Perry Dunn. Tim Monsheju and Nathan Scarborough led the three-man forward line, with Luke Hornsley, Yemi Adelani and Joe Wright all options on the bench.

Canvey named a strong side as well with Tobi Joseph and Josh Hutchinson on the flanks, supporting front pair Jason Hallett and captain George Purcell with forward Kane Gilbert and recent signing from ESL side Walthamstow, Samrai Gebrai options on the bench. The match begun in unforgiving, ferocious heat and any suggestion that Mark Bentley’s side may have been jaded from their FA Cup exploits 48 hours earlier was quickly snuffed out as their enterprising play needed home centre-backs Jamal Allen and Perry Dunn to be alert and make decent interceptions in the early stages.

Canvey gave their hosts a further warning as 12 minutes in, following a corner, skipper George Purcell’s rasping drive was deflected away. As it proved, it was an omen as minutes later, a defensive mix-up saw winger Josh Hutchinson break free at the far post before slotting home across goal past home custodian Rob Budd, into the corner. Recent signing Jason Hallett nearly made it two for the visitors on 18 minutes as his powerful effort sailed just wide. Hullbridge started to get back into the game more after the midway point of the half. Forward Tim Monsheju was their most creative spark as firstly his attempted chip on visiting goalkeeper Lamar Johnson went just over the woodwork before his fierce drive was saved by Johnson minutes afterward.

The Islanders’ defence was resolute in diminishing the clear-cut chances that the hosts could muster as the interval came, you felt it was the visitors who could have been further ahead. 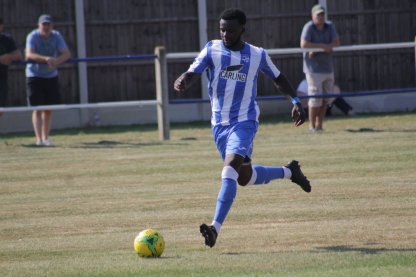 After the break, with the sunshine still beating down, it was the visitors who had the early chances. Six minutes into the half, a peach of a deep in-swinging cross by centre-back Michael Finneran found Hallett well though the forward could only head over the bar. Midfielder Albert Levett was also making the odd threatening run as well to add to the visitors’ attacking presence. The hosts responded as substitute Luke Hornsley was denied when one-on-one with Johnson with 54 on the watch. Canvey did double their advantage a minute later as winger Tobi Joseph’s unselfish pass found Purcell who had the simple task of firing low past Budd.

To be fair to Mark Bentley’s side, their attacks were taking the opposition full-backs out of the game at times though Messrs Dunn and Allen coped admirably making several well-timed challenges at the back. Just past the hour, Hullbridge substitute Matt Baxter had a great chance to halve the deficit though he was denied well by Johnson with only the goalkeeper to beat. The visitors had dropped down a gear for parts of the second half though moments after bringing on lively young forward Samrai Gebrai for Hallett, the former Walthamstow player had a impact. With eleven minutes of normal time remaining, Gebrai’s neat ball in found Joseph who calmly slotted past Budd to pretty much secure the points for Canvey.

As the game entered its latter stages, home substitute Yemi Adelani was well-denied by Johnson while at the other end, a sweet strike by Purcell swivelling was well-parried away by Budd. Hullbridge did get their first league goal late on, after Dunn had headed over from a corner, Hornsley was felled in the 18-yard area with Adelani tucking away the resulting spot-kick. In fairness, it did not detract from the visitors being worthy winners here with a performance to match.

Finally, congratulations to Canvey on their win and fair play as well to their supporters who added atmosphere throughout the match. My best wishes to Hullbridge as well this term, always good to see friends that we (me & my colleagues) have made in the past few years. Thanks also for their hospitality.

In terms of stand-out performances, Hullbridge still had a few with central defenders Jamal Allen and Perry Dunn among them, with Tim Monsheju also a threat while midfielder Emanuel Okunja and substitute Matt Baxter did well too. For Canvey, the front four of Joseph, Hutchinson, Hallett & Purcell all stretched the home backline while ‘keeper Johnson shone & substitute Gebrai also had an enterprising cameo here.